To give you an idea how impactful NAD+ can be, by age 50 a typical person may have only half the NAD+ they did in youth. By age 80, NAD+ levels drop to only 1% to 10% expressed in youth.

Deficiency of NAD+ predisposes us to accelerated aging and impedes our ability to fully benefit from resveratrol.

Fortunately, it is easy to restore your cellular NAD+ to higher ranges.

As a co-factor in cell energy transfer, NAD+ plays a critical role in regulating aging processes.

NAD+ is the acronym for nicotinamide adenine dinucleotide.

Found in virtually all living cells, NAD+ is essential to sustaining life.4

A fascinating aspect of NAD+ is its dual role in protecting against factors that age us. This includes mitigating chemical stress, inflammation, DNA damage, and failing mitochondria.

In other words, while a decline in NAD+ levels may negatively influence lifespan, restoring NAD+ is increasingly being viewed as a cutting-edge tool to promote longevity.

There is growing evidence that supplementing with a vitamin-like precursor of NAD+ called nicotinamide riboside can promote longevity in life forms ranging from simple worms to mammals like mice.5-11

One study showed an average 5% increase in the lifespan of old mice—even though supplementation did not begin until the mice were nearing the end of their natural lifespan (24 months).11

That would be the equivalent of gaining nearly an additional four years of life based on today’s average human expectancy of 78.8 years.12

A rigorous scientific review of NAD+ reveals that its longevity benefits arise from eight different, but interrelated, functions.

This article briefly summarizes each anti-aging mechanism played by NAD+ in your body.

NAD+ May Contribute to Longer Telomeres

NAD+ is required for functioning of the sirtuin proteins that contribute to longevity—and specifically to maintaining the length of critical telomeres.

Telomeres are stretches of repetitive DNA strands that cap the ends of chromosomes. Like the burning of a fuse, telomeres at the ends of our chromosomes steadily shorten every time a cell replicates itself. Once telomeres reach a critically short length, cell renewal virtually stops, leading to accelerated aging or death of the cell.13

Telomere shortening is both a marker of cellular aging and a predictor of shortened lifespan.14

Researchers have been searching for drugs and other interventions that might lengthen telomeres, in order to extend lifespan and/or health span. To date, exercise and weight loss have been reliably shown to be effective at telomere lengthening.15-17

Certain other nutrients, such as resveratrol, may activate sirtuins and contribute to extending lifespan, but emerging evidence suggests sirtuins function best with an ample supply of NAD+.

Conclusion: The possibility of extending telomere length with NAD+ holds out hope for slowing the aging process and improving longevity.

Even though DNA is protected by its chromosomal shelter, it is highly vulnerable to damage.

This can lead to broken DNA strands and mutations in crucial genes. Accumulated DNA damage contributes to the aging process and can result in specific lifespan-shortening diseases like cancer and poor immune function.18

When DNA is damaged, it activates an enzyme known as PARP-1 that carries out DNA repair within cells.19 To carry out its function, PARP-1 consumes enormous amounts of NAD+. As NAD+ is depleted, the ability of PARP-1 to repair DNA is significantly hindered.19-28

Conclusion: Improving DNA repair with NAD+ may slow cellular aging, reduce the persistence of cancer-causing mutations, and play an important role in preventing inflammatory conditions such as atherosclerosis.31,32 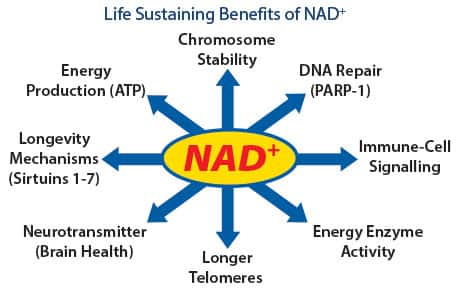 With advanced age, cell NAD+ levels plummet to near zero.
Normal aging may one day be classified as “NAD+ deficiency syndrome.”
Fortunately, there are proven ways to boost NAD+ levels.

As we age, our immune cells begin to lose their focus. Some become overactive, contributing to autoimmune disease, while others slow down, which increases the risk of infection. This process, called immunosenescence, is intimately related to mitochondrial function and energy balance,33 both of which depend on NAD+ activity.

Conclusion: Adequate intracellular NAD+ is vital for youthful cellular energy, a critically important factor in fending off immunosenescence and maintaining defenses against infections and autoimmune disease.

A universal feature of aging is the loss of cellular energy, which results in diminished ATP levels and inadequate cellular fuel necessary to power your body.23,36,37

One cause of this energy loss is a breakdown in the efficiency of the electron transport chain, the main pathway through which we extract energy from food (and of which NAD+ is an essential component).23,38 Disorders ranging from obesity and diabetes to bone loss have been associated with loss of this vital pathway.38,39

Studies now show that restoring electron transport chain function by raising levels of NAD+ is a rapid and efficient means of promoting the essential enzymes involved in energy extraction and sustaining youthful cell function. This helps to reduce physiological decline and provides protection from age-related disease.22,40

Conclusion: Improving the energy-extraction process in all cells with NAD+ increases their capacity to do the work they are specialized for. It also protects mitochondria from early death, a benefit that is associated with reduced cellular aging and lowered risks for cardiovascular and brain disease.41-45

Our chromosomes are complex structures housing our DNA. Access to DNA strands for “reading out” genetic instructions requires biochemical control of those proteins to make sure each gene functions properly.46

But like any complex molecular structure, chromosomes can become unstable. Eventually, this triggers errors in the ways our genes are interpreted—which ultimately contributes to deleterious changes in cell function and structure. Aging is accelerated in the presence of increased chromosome instability.47-49

In animal models showing that NAD+ contributes to longevity, a major factor has been shown to be sufficient availability of the nutrient.46,50,51 And studies show that when enzymes that require NAD+ are inactive, chromosome structure suffers and cells replicate abnormally.50

Conclusion: NAD+ supplementation is a promising cutting edge strategy to improve chromosome stability, a treatment that may slow down cellular aging (senescence) and lower the risk of cancer.

NAD+ Is a Neurotransmitter 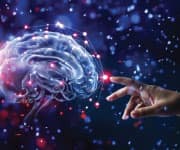 Neurotransmitters are brain chemicals that relay signals between nerve cells. In doing so, they help regulate body-wide functions such as mood, appetite, and stress.

NAD+ has been found to meet all criteria for a neurotransmitter.52,53

Evidence for NAD+’s neurotransmitter function has now been found in intestinal and blood vessel smooth muscles, as well as in the brain itself.52 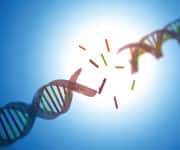 Proteins called sirtuins are major regulators of cellular aging because they influence fundamental functions such as DNA repair and inflammatory responses. They also influence whether cells enter a replicative cycle or instead die a programmed death (apoptosis).53

Compounds that activate sirtuins are eagerly sought as chemical “fountains of youth.” Familiar supplements like resveratrol and quercetin have been evaluated as promising sirtuin activators.2,54-56

NAD+ is required for sirtuins to function.57-59

NAD+ was first discovered as an important part of the process that channels chemical energy from foods to the ATP fuel our cells require. Recent studies have revealed that NAD+ is itself a form of “energy currency” similar to ATP.60

NAD+ is also a functional signaling molecule in processes related to energy production, including PARP-1 and sirtuins. When DNA damage occurs, PARP-1 consumes large quantities of NAD+, leading to reduced energy production. In addition, high levels of NAD+ can activate sirtuins, permitting them to carry out their metabolic and stress-protective responses and contributing to longevity.23

How to Boost NAD+

NAD+ is biologically unstable, which makes it unsuitable for oral supplementation. Fortunately, there’s a solution.

About a decade ago, researchers discovered that the compound nicotinamide riboside is rapidly converted by natural cellular enzymes into active NAD+.

Studies show that supplementing with nicotinamide riboside is an effective means of raising cellular NAD+ levels.6,22,61

The Metabolic Benefits of Boosting NAD+

Nicotinamide riboside boosts NAD+ and appears useful in preventing diseases associated with abnormal energy utilization. These include obesity, diabetes, and atherosclerosis, which are components of metabolic syndrome.

In another study of obesity induced by a high-fat diet, supplementation with nicotinamide riboside increased NAD+ levels, activated sirtuins, and protected against the oxidative stresses and other damage induced by the diet (many of NAD+’s longevity mechanisms mentioned above).22

Brain tissue is highly sensitive to alterations in NAD+ levels.67 A mouse study showed that supplementation with nicotinamide riboside increased NAD+ levels in the brain, slowed cognitive decline in mice with Alzheimer’s, and enhanced the plasticity in neurons that underlies learning and memory.67

Regular exercise is a panacea for most of the age-accelerating processes in our bodies. Recent studies are showing that nicotinamide riboside helps improve exercise performance by improving mitochondrial dynamics and muscle function.68

And in animals that had undergone removal of part of their livers, researchers showed that nicotinamide riboside supplementation promoted new DNA synthesis, cell replication, and increased liver mass—a vivid demonstration of its healing powers.69 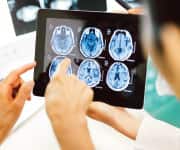 When these cell functions are impaired, the consequence is accelerated aging that contributes to disorders as diverse as Alzheimer’s and osteoporosis.

Restoring cell NAD+ levels has been shown to preserve youthful function—and even reverse some age-induced deterioration.

Nicotinamide riboside has been shown not only to restore NAD+ levels in tissues, but also to provide more NAD+ activity than can be obtained from diet alone.