Validation of the whole-body benefits of green tea continues to grow.1-6

A human study published in The Journal of the American Medical Association found that consuming 5 or more cups of green tea daily was associated with a 26% lower risk of cardiovascular death.1

A meta-analysis found that for every 500 ml-per-day increase in green tea consumption (about 3 cups), the risk of cognitive disorders decreased 29%.2

The most impressive published data shows meaningful reductions in risks of certain cancers in those who consume the most green tea.

This novel extract enables people to easily obtain the catechin content equivalent of drinking up to 12 cups of standard green tea.

While drinking green tea throughout the day is popular in Japan, it was challenging for people in Western cultures to adapt to this practice.

One reason large amounts of tea need to be consumed are absorption issues. It requires a lot of tea to boost blood levels of disease-fighting green tea polyphenols.

This led to massive research efforts to develop extracts from green tea leaves. This research yielded concentrated powders of active polyphenols that were more absorbable than green tea beverages.

Unlike FDA-regulated prescription drugs, free market forces drove down the price of standardized green tea extracts to where they became one of the better values on the dietary supplement marketplace.

Relentless research has advanced this absorption technology to a new level. Health conscious consumers can now benefit from higher potencies of a broader spectrum of green tea polyphenols. Green tea comes from leaves that have not yet oxidized to become black tea.

The most abundant catechin in green tea is epigallocatechin gallate (EGCG), accounting for as much as 65% of all green tea catechins.17

Scientists have identified other green tea catechins that also contribute to its long list of health benefits. These additional catechins are:7-14

In animal and human studies, greater green tea consumption and increased catechin intake are correlated with improvements in health and reduced disease risks, including:

To provide a broader range of beneficial catechins, scientists have developed a novel green tea extract that delivers 8 different catechins that can be efficiently absorbed by the body.15

Within just 6 hours of harvest, the fresh, live tea is processed at the same location by a patented extraction process which “unlocks” 8 catechins naturally found in tea, making them more available for optimal absorption in the body.

The catechins are then formulated into plant-derived liposomes, tiny spherical structures that can easily pass through cell membranes, allowing greater absorption directly by the cells in the body. That means an individual can now obtain and absorb a greater amount of green tea’s benefits from a smaller amount of tea.

By using these special techniques, the green tea extract can stay in the body for up to 24 hours, allowing for greater absorption of all 8 green tea catechins.16

Green tea also supports blood vessel health and maintains healthy blood flow. It does this by:19

The net effect of these benefits is that green tea intake is strongly associated with reduced risk of cardiovascular disease and death.

A large, prospective study of human subjects, followed long-term, was published in The Journal of the American Medical Association (JAMA).1 In more than 40,000 individuals, those who consumed more than 5 cups of green tea daily benefited from as much as 26% lower risk of death from cardiovascular causes compared to people who drank less than one cup daily.1

What you Need to Know

Researchers for many years have focused on green tea’s unique, multiple anti-cancer benefits.

The catechins in green tea have shown an ability to fight cancer in multiple ways.18,30

In addition to powerful free-radical scavenging and anti-inflammatory effects, which help protect cells from harmful mutations that can lead to cancer, several green tea catechins demonstrate a wide range of other benefits, including:

Animal and cell studies have shown that green tea is associated with protection from various forms of cancer, including some of the most common, such as breast, prostate, lung, colon, and skin cancer.18,34-36 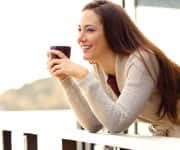 Chronically elevated blood glucose levels can progress into diabetes and can be a factor in a myriad of degenerative diseases.37,38 Over time, it causes damage to almost all tissues in the body, greatly accelerating aging and increasing the risks for many age-related diseases.

Dietary changes and weight loss are often recommended to improve control of glucose levels. The catechins in green tea can also aid the body in processing glucose and preventing the harmful effects of elevated glucose.

A group of researchers performed a pooled analysis of 17 randomized human trials of green tea extract (using both beverage and capsules) for glucose control.21 Overall, these studies found that intake of green tea extract modestly reduced glucose levels (on average by almost 2 mg/dL).

Green tea extract was found to lower values of hemoglobin A1c (HbA1c), a measure of long-term glucose control. Higher levels of HbA1c result in greater incidences of diabetic complications. HbA1c is often used to track progress in the treatment of patients with diabetes.

Green tea trials show an average HbA1c reduction of 0.3%—a notable amount, since less than a 1% difference in HbA1c can mean a significant difference in disease risk.21,39 Neurodegenerative disorders such as mild cognitive impairment, Alzheimer’s, and Parkinson’s are growing increasingly common. Unchecked, they rob the aging population of brain function, particularly cognitive abilities such as memory and attention.

Several studies have confirmed the link between tea consumption and protection from neurodegenerative diseases such as Alzheimer’s dementia and Parkinson’s disease.20,22,23

A team of researchers in China recently performed a meta-analysis, pooling results from several well-designed studies including more than 48,000 participants.2 What they found is that higher consumption of tea was associated with lower odds of cognitive disorders.

When researchers went further and looked at the effects of specific types of tea, they found that only green tea, not other types such as black tea or oolong tea, remained a significant predictor of beneficial cognitive outcomes. Green tea was associated with 36% lower odds of developing cognitive disorders.2

Several other studies have revealed similar findings, not just for cognitive decline and dementia but also for other neurodegenerative disorders such as Parkinson’s disease.17,20,22-24

Green tea is rich in an assortment of healthful plant compounds known as catechins.

Studies consistently demonstrate that higher intake of green tea and its catechins is associated with lower risk for common age-related diseases, including cardiovascular disease, metabolic syndrome, cognitive dysfunction, and cancer.

A new broad-spectrum green tea extract provides 8 different, highly bioavailable catechins. Encapsulating them in easily-absorbed liposomes further enhances their stability and bioavailability and equates to drinking the catechin content equivalent of up to 12 cups of standard green tea.