Many disorders of advancing age are linked to a common problem: chronic inflammation.

Inflammation damages tissues and contributes to a variety of ailments, including atherosclerosis and cardiovascular disease, stroke, diabetes, Alzheimer's and other forms of dementia, arthritis, and cancer.1-4

If we can impede chronic inflammation, we may delay the onset of many age-related diseases.

Working together, the active components in these plants, such as gingerols, curcumin, and turmerones, provide a potent "1-2 punch" to chronic inflammation, helping to maintain healthy tissues.

What you need to know 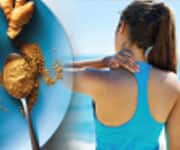 Chronic, low-grade inflammation doesn't just increase the risk of disease—it has been identified as one of the key contributors to the aging process itself.1,3,4,10,11

Inflammation plays such a central role in age-related ailments that scientists have coined the term inflammaging to describe its effects.1

There are many different causes of this type of chronic inflammation.

With advancing age, many cells become senescent. That means they no longer divide or support tissues. Senescent cells also spew out harmful compounds that activate inflammation and cause tissues to age more rapidly.4

In overweight or obese individuals, excess fat cells release compounds that promote inflammation throughout the body.1,3

For centuries, ginger and turmeric have been recognized as powerful anti-inflammatory plants. They both contain beneficial compounds that reduce inflammation and offer other health benefits.

They also have antiviral and antibacterial properties that help to bolster the immune system's defense against pathogens. Ginger and turmeric have also demonstrated anti-cancer properties.12,13

Ginger is a flowering plant whose underground stem or rhizome, also known as ginger root, has been used in cooking and as a natural medicine.

Ginger root is the source of a cocktail of beneficial compounds, including gingerols, that have free-radical scavenging and anti-inflammatory properties.14

Leukotrienes contribute to dangerous inflammatory reactions. Compounds in ginger have been found to inhibit enzymes that produce leukotrienes.5,6

Ginger also works to reduce inflammation by affecting several other compounds and cellular pathways, including:

Turmeric, a close relative of the ginger plant, has a bright yellow-orange rhizome. Like ginger, turmeric is a source of both spices and medicine.

Curcumin and other curcuminoids are compounds derived from turmeric that have been the most-studied. There is a robust research record showing their efficacy in fighting inflammation. Most extracts of turmeric on the market primarily contain isolated curcumin.

Other compounds found in turmeric, such as turmerones, offer their own health benefits, many of which help to augment the effects of curcumin.23

Turmeric's anti-inflammatory effects are, like ginger's, inhibition of leukotrienes and other pro-inflammatory pathways, as discussed on the previous page. Turmeric has additional effects that go beyond what ginger can do, including:

In addition, STAT3 signaling, which is associated with inflammation and development of some cancers, has been shown to be suppressed by turmeric.29,30

Specific Conditions for which Ginger and Turmeric are Beneficial

Although turmeric and ginger contain different compounds, they offer overlapping anti-inflammatory properties and complementary effects. In other words, they complement each other.

Together, these two plant roots and their extracts offer superlative anti-inflammatory effects. Scientific studies have shown that ginger and turmeric can help fight a wide range of age-related disorders and conditions that include practically every system and organ in the body.

The following are a few of the conditions for which extracts of ginger and turmeric can be beneficial.

Obesity, diabetes, and metabolic syndrome are increasingly common and are risk factors for many other problems, such as cardiovascular disease.31,32 Inflammation is strongly associated with these disorders, and is a primary driver of the health problems to which they lead.33

Research shows that both ginger and turmeric help alleviate many of the metabolic abnormalities that characterize these disorders.15,18,22,34-39

The abnormalities associated with metabolic disease and diabetes are strong risk factors for blood vessel disease that can lead to heart disease, stroke, and other related conditions.

Preclinical studies show that both ginger and turmeric reduce the risk for these diseases by improving glucose and lipid control. They also contribute to blood vessel health by blocking inflammation that leads to atherosclerosis (hardening and narrowing of the arteries).24,28,40-42

Studies in animal models that include ginger and turmeric have shown that both compounds reduce vascular inflammation and protect blood vessels from the damage that high blood pressure and abnormal cholesterol levels can cause.40,41 This suggests a reduction in the risk for atherosclerosis and its dangerous consequences, including heart attacks and strokes.

A common cause of loss of mobility in older age, osteoarthritis occurs when the protective cartilage on the ends of the bones wears down. Human studies have now documented the ability of curcumin and ginger to help reduce its symptoms.43,44

Improvement of several clinical markers of arthritic disease has been observed, including lower levels of pro-inflammatory compounds, improved physical function, and better quality of life.19,43,44

Curcumin and ginger have also been shown to be beneficial for rheumatoid arthritis, an autoimmune form of arthritis that starts when the immune system targets the joint linings.45-47 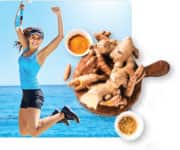 Turmeric and curcumin are recognized for their ability to protect against many of the age-related changes that occur in the brain and contribute to loss of cognitive function. They protect against biochemical pathways of neuroinflammation, which are involved in the development of neurodegenerative diseases like Alzheimer's and Parkinson's disease. In preclinical models they reduce the damage done by abnormal proteins like beta-amyloid.26,27,48

Ginger has similar benefits. Not only do compounds found in ginger reduce brain damage caused by amyloid abnormality and inflammation, they have been found to inhibit acetylcholinesterase, an enzyme that breaks down the neurotransmitter acetylcholine.49,50 This helps boost brain levels of acetylcholine, which is essential for processing memory and learning. Most pharmaceutical drugs used to treat the symptoms of Alzheimer's disease do just this.

Taken together, the combination of ginger and curcumin may help both prevent the progression of these common brain diseases and reduce their symptoms.

Inflammation is a major contributor to the formation of most cancers. By fighting inflammation along with other mechanisms, ginger and curcumin have been shown in many studies to help inhibit the growth of tumors. Together they promise to be significant weapons in the fight against cancer.2,14,29,51-56

Chronic, low-grade inflammation has many causes. It is a major contributor to the loss of function and risk for disease that become more prevalent as we age.

In fact, almost all age-related changes and disorders can be tied to inflammation, from arthritis and diabetes to dementia and cancer.